Across a suburb not yet ancient

I gaze out from the balcony of Radarz Bar

at the tin plateaux and peaks

In the shape of certain chimney pots

and with the prayer flag of this poem

I start off on a pilgrimage without a passport

even as I feel these streets begin to vibrate with blue ice.

above the building site of an incomplete song

traverses an arc of 360 degrees

to tremble just above the true magnetic of my heart.

in the paddocks of old pages

I demolish the towers of half written poems

words without meaning located in the wind

unknown constructions of the self

those stone compositions ephemeral as breath

I have given my life to building them

while a child chasing butterflies

beneath the wide eyed blossom

of an apple tree

tells me that a wind rising in Tibet

will soon cut to the centre of the solitude of diamonds.

In what rooms of emphysema

did I study tattered curtains of boarding house windows.

Those hours as desolate

as supermarket car parks on public holidays can be.

In any of those rooms the wallpaper would be

at least as interesting as Proust.

My breakfast of old coins

that had slept in countless pockets.

To alleviate that horror

I gnawed the grimy head of some old queen

the cold thigh bone of a flightless bird.

As it never is it was no one’s fault in particular.

Once I saw on television

dive into the heart of America.

I watch a seagull tow a sign across the sky –

have there ever been so many signs in the sky.

Tomorrow I will be a helix flying to the gates of paradise.

To write a poem is to hijack a star.

Outside on a news stand

the poster advertises an out of date disaster.

Louise walks in beautiful in black

and tells me that this time next week

she will be living in Australia. Her red lips when she laughs

form a tiny sunset on the horizon of my heart.

Yesterday my brother set sail into the ocean

with my father it is now impossible to have a conversation

as dead as the mouse that I came across this morning

incinerated in a toaster.

When I phone my sister someone else is always on the line.

From one side of a dream to the other

I am thankful for the kindness of my wife.

Once I made my way up Queen Street

from the plains of downtown Auckland

to the foothills of the Aotea Centre

to hear the Dalai Lama speak.

Today I sit in Radarz Bar

where so little and so much has taken place so far.

I watch pigeons fly across the street –

to the dusty window ledges of their not yet ancient mountain.

They leave their shadows far below

the pigeons and their shadows

as a bus arrives and then departs

It vanishes out west into the red wall of a sunset –

there the smallest fact of life can assume significance.

I dream of construction cranes that search for new religions.

In the patina of a pigeon’s head

out of blue sky

have caught this lightening. 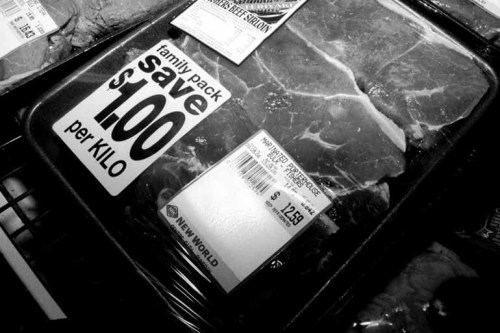 I stand at the checkout counter

my karma in a trolley –

in a polystyrene tray the red slice of a muscle

of some nameless beast –

the severed legs of birds

whose harmless cluckings will never now be heard.

I place at the counter

the stoicism of potatoes

the nervousness of celery

tomatoes that each contain a sunrise

the subterfuge of mushrooms

and the weird wisdom of capsicums

in the last rites of olive oil.

And as I pass across a small tin of sardines

the futility of appetite

hits home to me.

It’s for you especially

specific as a star

a pea pod who learnt to swim

to whom I’ve decided to dedicate this poem.

In these days of our existence

when fish are raised on farms

and birds in factories

don’t you think how strange it is

To a civilization almost unsung

this tribute I now sing.

what true magnetic spoke to you.

Alert to the vibrations of cool fathoms

you carried your own destiny

through vast continents of blue mystery.

As if each star had decided to migrate

The Milky Way of your passage

each night you formed new nebulae

galaxies exploding in your wake

giant corollas beneath a salty sun

and you took no notice that God came along for the ride.

By the coasts of broken Africas

fishing boats at night floated out like quarter moons

in your coffin of tin

at the checkout counter

I stand before you in silent requiem.

oh citizen of the seas

gypsy with a silver body

you must also surely know

that in our time beheadings are very much in vogue. 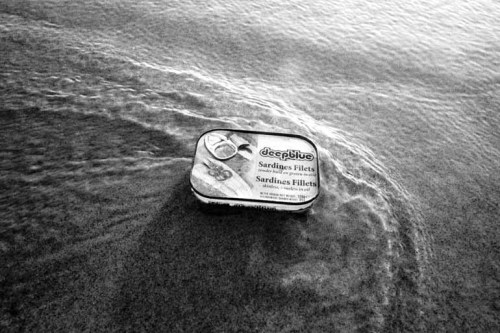